One of England's best young harp players, 16 talented female singers, an experienced musical director and a programme of 20th century music - this was a heady mix for a Christmas concert.

Was it the tunefulness of the Rutter carol, the intensity of the Pro Nobis by Clucas, the virtuosity of Eleanor Turner playing the Damase or the sheer variety in the Britten that made it so special? It's hard to say, but the clarity of the singing and the combination with the harp were stunning.

A member of the audience commented 'this is a new sound for Stamford'. How right. This concert was a gem.

A French theme, including works by de la Halle , Couperin, Delibes and Poulenc took us on an 800-year tour of French music.

The group of 16 talented female singers really use the acoustic at St Martin's to wonderful effect. The Couperin Mass, with organ played by Fergus gave a wonderful sense of 17th Century French Church music, while the Poulenc brought us firmly into the 20th Century.

Amy Turner gave a delightful and sensitive solo performance of a series of transformations on the oboe.
__

The highlight of the concert was Howard Goodall's beautiful new song-cycle, Winter Lullabies, for which the singers were joined by harpist, Eleanor Turner.

The concert featured the first modern performance of Dies Irae by Salvador Pazzaglia , a remarkable find in the Burghley House Music Library that was transcribed especially for this concert.

It was delightful; a rare treat, one of those concerts that make you glad still to be around.

We look forward to hearing about any future St Martin's concerts.

The centrepiece of the St Martin's Singers' programme was the cycle of six carols by Karl Jenkins (of Adiemus fame) with traditional carol words (Silent Night, In Dulci Jubilo etc) but with new music by Jenkins for women's choir, recorder and piano.

Other works by Britten (the fabulous Corpus Christi Carol), Vaughan Williams and Holst, together with solos from various members of the group made this a very special event.

Choral music by Russian composers in the first half (Chesnov and Bortniansky - his setting of the Divine Liturgy), then Mendelssohn's the three motets for upper voices, Op.39, which are wonderful. To finish, Schubert's 23rd Psalm.

Our own acclaimed choir of female voices in its fifth annual Christmas Concert.

The choice of music spans a thousand years, from the early works of the Notre-Dame school, through some charming carol arrangements, and culminating in the (rather lush) Grand'Messe de Noël by François-Auguste Gevaert, who, like many famous Frenchmen was actually Belgian. No matter!
__

STILLE NACHT!
St Martin’s Singers’ Annual Christmas Concert - at St Martin’s Church
Following the success of their Joyeux Noël concert last year, the St Martin’s Singers presents a concert of German Christmas music: Bach, of course, and
other German baroque composers, some carols - both familiar and unfamiliar - and a few surprises!
Ticket prices: £10 Tickets from Stamford Arts Centre 01780 763203 or at the door

Stamford’s women’s voice choir lights the Christmas candle with music for upper voices and harp, including Anthony Bolton’s “Garland of Carols”, his hommage to Britten. Conducted by Fergus Black

In Verdi’s bi-centenary year, Fergus Black and the St. Martin’s Singers celebrated sunny Italy: the home of song, and of opera! In the omnium-gatherum programme, sacred choruses by Verdi and Donizetti rubbed shoulders with popular Italian carols, operatic arias and a Palestrina Magnificat. It was great fun!

We attended your Christmas Concert last Wednesday and were truly amazed at the quality of your singers. It was a magical evening and we thank you all for the hard work and time that was spent to give such a joyful concert. A Merry Christmas and a Happy New Year.
Members of the audience
Poster | Programme

In his seven-section Requiem, the French composer Gabriel Fauré distilled some of the most beautiful melodies he ever composed. It is often described as 'heavenly', and sounds even more like the music of the angels in Desmond Ratcliffe's arrangement for women's voices.

St Martin’s Singers, Stamford’s women’s voices choir, presents a programme of 24 short pieces on Christmas themes - 24 jewels like an Advent Calendar. If you have ever been to one of their concerts, you will know to expect the unexpected: a renaissance motet rubs shoulders with an opera aria, a christmas carol takes on Mel Tormé.

St Martin’s Singers, Stamford’s women’s voices choir, presents a programme of wordless music inspired by the Songs for Survival (see below). Also in the programme, other vocal pieces with no text: Kodaly’s Mountain Nights, Puccini’s Humming Chorus, and solo songs, such as Rachmaninov’s Vocalise. Also, if it doesn’t seem irreverent, Stephen Hatfield's Three Ways to Vacuum Your House! (which are filled with the nonsense syllables imitating the humming and muttering one does during housework), mostly in a Latin American vein.

Admission Free - Retiring Collection
On a Sunday in July 1942, during worship in a Japanese prison camp for women and children in Palembang, Sumatra, a trio of British women sang a new hymn. It was “The Captives’ Hymn,” for which one of the three, Margaret Dryburgh, a Presbyterian missionary who had lately worked among the Chinese in Singapore, had written the words and the music. This hymn heartened the several hundred of us isolated for three and a half years from the rest of the world in a succession of miserable places.

After a year and a half of captivity, Margaret Dryburgh, with an outstanding musical memory, made the camp another great gift. She helped Norah Chambers, a graduate of London’s Royal Academy of Music, with music for a “vocal orchestra” that would sing orchestral and piano works. On December 27, 1943, the vocal orchestra presented its first concert. The singers sat on little stools, too weak from malnutrition and disease to stand a long time. They were barefoot. Bandages covered tropical sores. Norah Chambers raised her hands. Very softly, as through a haze, the first chords of the Largo of the “New World Symphony” reached us listeners packed together in the compound. Some of us wept. We had not expected such beauty among the cockroaches, the rats, the bedbugs, the lice, and the smell of the latrines. The concert renewed our sense of human dignity. It gave us courage to go on.

Saturday 12th December 2021 at 3:30pm
for about an hour
at St. Andrew’s Church, Ufford
postcode for satnav PE9 3BH 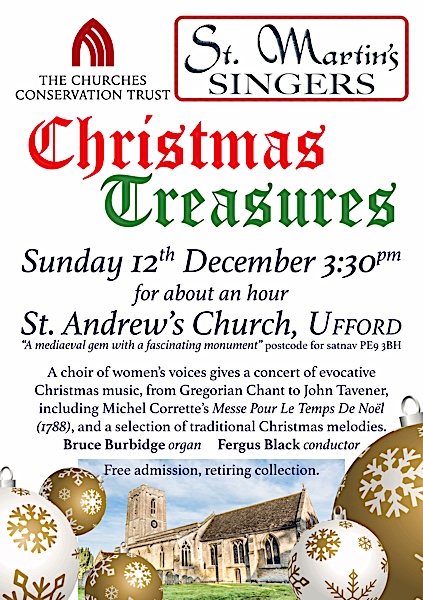